I’ve been home for a week now and what have I been doing so far?
.
.
.
.
.
.
.
Nothing! Hahahaha…
Like seriously, all I do in a day is eating, watching TV/movies, going online, tidy up my room (I’m spring-cleaning my room), and …ermm…going out sometimes (I don’t really feel like going out lately), and….that’s all!

LoL…I know I know…so inactive right? Hahahaha…nevermind la..let me santai2 before I get a job. Hehehe :p

Anyway, while I was spring-cleaning my room, I found some old stuffs…

This one will make you go “wt*” even more. Hahahaha…It’s a pocket tissue! Mochi specially brought it from KL to Beijing when he visited me in BJ on my birthday last year. He knows I like cute stuffs (which girl doesn’t?), and so he purposely brought this for me to take picture! So cute leh 😀 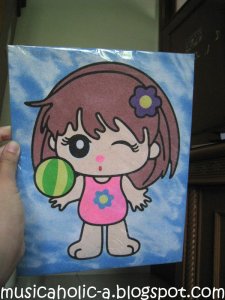 That is a sand picture. You know, the one that made by pouring colorful sands onto the sticky picture base. Usually only small kids do this kinda thing. But, this one was made when I was in HIGH SCHOOL! Hahahahahahahaha…yes you read it correctly! I did a picture sand when I was in high school! lol. And no, I didn’t do it alone. Afong did it together with me as well, so we had 2 identical pictures like this. I guess the store staffs and other customers were laughing at us, but we just didn’t care. lol

Ok, enough for the old stuffs.

Anyway, This thing has been around in my house for quite some time (a few years I guess), but I never used it until now… 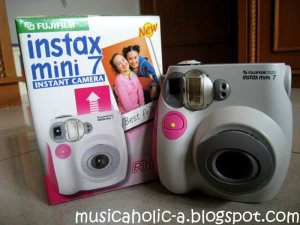 It’s Fuji Instax Mini!!!
Yea, it’s an instant camera, just like Polaroid. Got it from a bank or what I forgotten. I think my dad got it. Since I don’t have Polaroid yet (I want a Lomo and Fish Eye lens btw T_T), this is also a good replacement for it. Hahaha..Not replacement la, since it’s good also. I love it!! 😀

It’s quite bulky, but it’s cute and it’s in PINK! 😀
(What a clever bank cos they gave it in pink)

That’s the slot where the picture will come out from

Press the pink button on the front, and…

You’ll have a credit-card-size photo right away!

The first two pictures I took…

And they also gave the film together (4 boxes of them) and they are already expired (January 2008). Hahahaha but nvm. Still can be used.

One thought on “A week after coming back”

What Are You Looking For?