You know, reading about natural disasters on local newspapers always broke my heart, be it small or huge. Oh well, who doesn’t anyway? Unless you are one heartless cold-blooded creature, then you should have been grieved to see such news.

It was 2am, such a time when people are peacefully sleeping, or watching TV, or chit-chatting with the family or neighbors or whoever they are. That was what the residents in Situ Gintung was doing normally.

But that Friday, everything has changed and it won’t be the same again. After the heavy rain on 26-27 March, the dam level has risen, apparently because the gate leading to the spillway was too small. 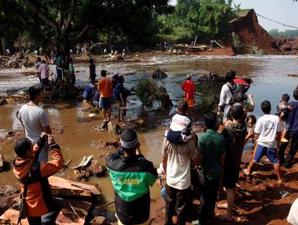 Haiz…read here for further information. I am lazy to type.

So anyway, last night there was this special show about the Situ Gintung tragedy. I could see most of the audiences (including some Indonesian famous stars) were tearing (or at least they looked like they wanted to cry) during the show. Basically the presenter was interviewing a 4 or 5 victims of the tragedy. They lost a lot of their loved ones. One of them, named Iwan, even lost 7 (Yes, SEVEN. QI. CHAT.TUJUH) family members of his: his wife, daughter, parents, and 3 younger brothers (or sisters, I’m not clear about that). But he was so brave he didn’t shed a tear while talking (but his eyes were red already, tho).

Anyway, Situ Gintung used to be a recreation area for Jakartarians who wished to rest their eyes from the pollution and all the shits of Jakarta. There, they could play banana boat, or wen for a simple outbound, or riding an ATV or playing tennis, or….

Photo taken by Agus G. Riyana, taken from Panoramio
Yes, that was how Situ Gintung used to be…

Forget it. The place is just a memory now…

Just now I checked the online news and they said the death toll has reached three digits!!
Omg!

See the video below:

And who the hell should be blamed for this?

I’ll leave it up to you for the answer 😉

What Are You Looking For?